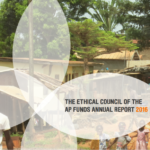 The Ethical Council of the Swedish AP Funds celebrates ten years 2017. During these ten years the Council has through engagement encouraged the AP Funds’ global portfolio companies to improve their work on environmental issues, human rights and corruption. In 2016 dialogues have covered companies regarding the fishing industry in Thailand and the guest workers’ situation in Qatar.

Based on the mandate of the AP Funds the Ethical Council works with both preventive and reactive work with global companies in the AP Funds’ portfolios. The aim is to improve and have a positive impact regarding environmental and ethical issues in the operations of companies.

In 2016 the Ethical Council held dialogues in different sustainability areas totaling 316 companies worldwide. Biological diversity, anti-corruption and human rights continue to be examples of focus areas. The Council, for example, is engaged in a large number of dialogues on forced labor and child labor with the cocoa and tobacco industries. In 2016, the Ethical Council recommended the AP Funds to exclude the mining company Zijin Mining since the company has not responded to the Ethical Council’s demands for improvements on a policy regarding the discharge of mining waste in rivers, so called riverine tailings.

– The Ethical Council has during the past ten years worked with engagement as a means to solve problems and incidents that occur in business operations of investee companies. It is a sustainable strategy instead of selling the companies. To remain as owners and work for improvements was initially a bit of a unique approach from the AP Funds’ Ethical Council, but this has now evolved to become the standard for responsible investors. The Council has however, no plans to rest on its laurels, but continue to work on environmental issues, human rights and corruption, says Peter Lundkvist, Chairman of the Ethical Council in 2017.

Please find the new annual report for 2016 at http://etikradet.se/rapporter/?lang=en